It's pathetic that so many public companies miscalculate EBITDA (earnings before interest, taxes, depreciation, and amortization) and violate Regulation G governing the calculation of non-GAAP measures such as EBITDA. It seems that too many CFOs, Audit Committees, and auditors don’t take the time to thoroughly review compliance with all appropriate SEC financial reporting rules. 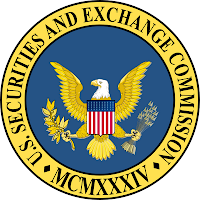 First, let's review how EBITDA supposed to be calculated

According to the SEC Compliance & Disclosure Interpretations, EBITDA is defined as under Regulation G as net income (not operating income) before interest, taxes, depreciation, and amortization. See below:

Question: Exchange Act Release No. 47226 describes EBIT as "earnings before interest and taxes" and EBITDA as "earnings before interest, taxes, depreciation and amortization." What GAAP measure is intended by the term "earnings"? May measures other than those described in the release be characterized as "EBIT" or "EBITDA"? Does the exception for EBIT and EBITDA from the prohibition in Item 10(e)(1)(ii)(A) of Regulation S-K apply to these other measures?

Answer: "Earnings" means net income as presented in the statement of operations under GAAP. Measures that are calculated differently than those described as EBIT and EBITDA in Exchange Act Release No. 47226 should not be characterized as "EBIT" or "EBITDA" and their titles should be distinguished from "EBIT" or "EBITDA," such as "Adjusted EBITDA." These measures are not exempt from the prohibition in Item 10(e)(1)(ii)(A) of Regulation S-K, with the exception of measures addressed in Question 102.09. [Jan. 11, 2010]

In other words, the only way to properly compute EBITDA under Regulation G is by starting the calculation with net income and adding back only interest, taxes, depreciation and amortization. A public company cannot add back other items such as stock-based compensation costs, impairments of fixed assets, or anything else to compute EBITDA. Such errors can materially overstate EBITDA and lead to potential regulatory sanctions. Any different calculation cannot be called EBITDA, but can be called "Adjusted EBITDA" or some other appropriate name.

The acronym EBITDA refers specifically to earnings before interest, tax, depreciation and amortization. However, your measure also adjusts earnings for stock option expense. We will not object to your using such a measure as a liquidity measure but request that you rename it to avoid investor confusion.

CGG Veritas responded to the SEC:

In response to the Staff’s comment, we will in future filings refer to the non-GAAP measure in question as “EBITDAS”, which we will define as “earnings before interest, tax, depreciation, amortization and share-based compensation cost…

A. H. Belo Corporation, FirstService Corporation, Animal Health International, Inc., Schawk Inc., and Penn National Gaming Inc. all erroneously included asset impairment costs in their EBITDA calculations and some of them also made multiple errors by including other items such as stock-based compensation costs in their calculations.

See yellow highlighted item from the company's 8-K report below. Click on picture to enlarge. 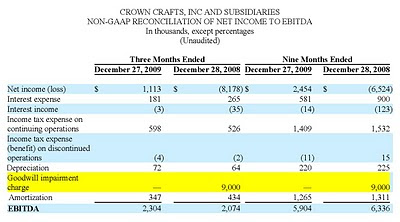 The SEC Division of Corporation Finance reviewed the company’s 8-K report and told them to correct their EBITDA calculation:


We note that your calculation of EBITDA in the press release furnished as an exhibit includes an adjustment for goodwill impairment charges. As such, the non-GAAP measure should not be characterized as EBITDA. When you include an adjustment that is not included in the definition of EBITDA as set forth in Item 10(e) of Regulation S-K, please revise the title of the non-GAAP measure to clearly identify the earnings measure being used and all adjustments. Refer to question 103.01 of the Division’s Compliance & Disclosure Interpretations on the use of non-GAAP measures available on our website at http://sec.gov/divisions/corpfin/guidance/nongaapinterp.htm

Like Crown Crafts, both A. H. Belo and FirstService erroneously included asset impairment charges, such as goodwill impairment, in their EBITDA calculations. 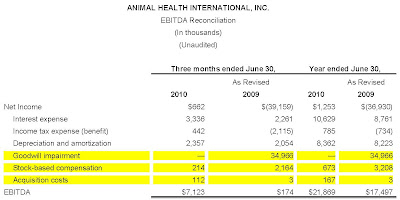 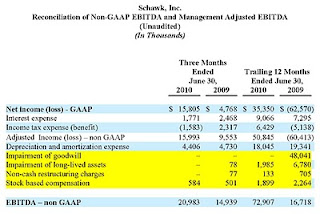 Penn National Gaming was the worst offender in erroneously calculating EBITDA of all the companies discussed so far. The company erroneously defined EBITDA as "income (loss) from operations, excluding charges for stock compensation, impairment losses, Empress Casino Hotel fire, depreciation and amortization, and gain or loss on disposal of assets, and is inclusive of loss from unconsolidated affiliates."

As I detailed above, EBITDA is defined by the SEC as net income (not operating income as used by Penn National Gaming) before interest, taxes, depreciation, and amortization. In addition, stock compensation, impairment losses, Empress Casino Hotel fire, gain or loss on disposal of assets, and loss from unconsolidated affiliates cannot be properly included in an EBITDA calculation. 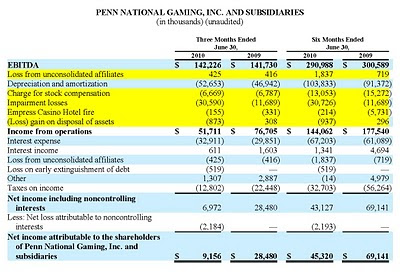 CFOs, Audit Committees, and auditors of all the public companies need to study SEC rules governing the calculation of non-GAAP measures such as EBITDA and follow them. I will continue tracking future financial reports, especially reports issued by the companies cited here, to see if they miscalculate EBITDA and violate Regulation G again. Avoid the embarrassment and possible SEC scrutiny!

Please read important disclosure at bottom of this post.

Comment of the day by Seeking Alpha Contributor Ilene:


For example, Penn National Gaming (PENN) erroneously reported EBITDA as earnings before interest, taxes, depreciation, amortization AND charges for stock compensation, impairment losses, disposal of assets, losses from unconsolidated affiliates and the Empress Casino Hotel fire--that would be an "Adjusted EBITDA" or in PENN's case, EBITDASCILDALUAECHFIRE.

I am a convicted felon and a former CPA. As the criminal CFO of Crazy Eddie, I helped my cousin Eddie Antar and other members of our family mastermind one of the largest securities frauds uncovered during the 1980's. I committed my crimes in cold-blood for fun and profit, and simply because I could.

I do not own any securities in the companies cited in this blog post, long or short. My investigation of these companies is a freebie for securities regulators to get me into heaven, though I doubt I will ever get there.
Posted by Sam Antar at September 12, 2010