Today, I am pleased to report that Comtech Telecommunications (NASDAQ: CMTL) released its Q4 financial results and properly revised its previous erroneous EBITDA calculation to call it an alternative "Adjusted EBITDA" in compliance with SEC rules.

Last July, I reported that Comtech erroneously added back "amortization of stock-based compensation" to net income to compute EBITDA. See below:

In its Q4 2010 financial report released yesterday, Comtech added back "amortization of stock-based compensation" and "impairment of goodwill" (two items not properly included in an EBITDA calculation) to properly compute an alternative non-GAAP "Adjusted EBITDA" in compliance with SEC Regulation G. See below: 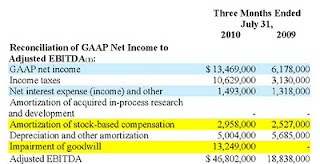 In the recent past, Overstock.com (NASDAQ: OSTK) CEO Patrick Byrne orchestrated a smear campaign against me and hired internet stalker Judd Bagley to pretext my children and relatives after I pointed out various violations of Generally Accepted Accounting Principles (GAAP) and SEC rules governing non-GAAP financial measures such as EBITDA. The company's pretexting operation targeted dozens of other journalists, bloggers, critics, and their children, too. Barry Rithholtz called Judd Bagley a "possible pedarast." Overstock.com is under SEC investigation. 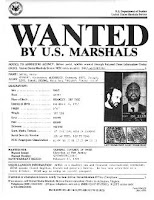 Unlike Overstock.com, Comtech took the high road and corrected its errors without attacking a critic. My only suggestion is for the company to file amended form 8-Ks with the SEC to correct previous erroneous EBITDA calculations in its filings.

As an award, I am sending Comtech President and CEO Fred Kornberg a personally autographed Crazy Eddie Antar wanted poster. However, he will have to settle for my autograph since Eddie and I are not on speaking terms.

I am a convicted felon and a former CPA. As the criminal CFO of Crazy Eddie, I helped my cousin Eddie Antar and other members of our family mastermind one of the largest securities frauds uncovered during the 1980's. I committed my crimes in cold-blood for fun and profit, and simply because I could.

I do not own any securities in the companies cited in this blog post, long or short. My investigation of these companies is a freebie for securities regulators to get me into heaven, though I doubt I will ever get there.
Posted by Sam Antar at September 24, 2010