On Twitter, Herbalife Uses "Herbalife Truth" To Tell A Lie

One of the main concepts I teach about financial crimes is that fraudsters seek to create false images of stature and integrity in an effort to gain the trust of their potential victims. Apparently, Herbalife (NYSE: HLF) is employing the same playbook used by fraudsters in an effort to create a phony image for itself.

Last week, the company claimed to be an "American made company" on a twitter account called "Herbalife Truth" which was created to counter allegations by Bill Ackman that it is running an illegal pyramid scheme. However, the cover page of Herbalife's 10-K report states plainly that its principle executive offices are located in Grand Cayman, Cayman Islands. Many of Herbalife's manufacturing facilities and its contract manufacturers are located outside the United States. See Herbalife's tweet and my response below (click on image to enlarge): 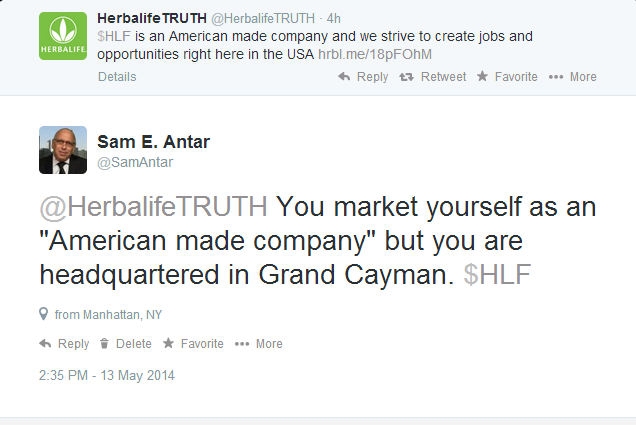 Then I asked my friend Zac Bissonnette, the best-selling author of "Good Advice from Bad People" and frequent Herbalife critic what to do. He responded:

If Herbalife's rebuttal is that there's nothing wrong with being headquartered in the Cayman Island and doing manufacturing outside of the United States, here's my response: Exactly. Unable to refute any of the substantive criticisms of its business model and marketing practices, Herbalife is boasting about things that have absolutely nothing to do with the issues at hand. That the company can't even construct a factually accurate red herring is just a little bonus for its critics.


Needless to say, Zac's advice inspired me to write this piece. To say Herbalife is an "American made company" is quite a stretch. "Herbalife Lies" would be a more truthful name for Herbalife Truth's twitter feed.

There is a saying, "It takes one to know one." I've provided professional work for the FBI, IRS, SEC, Justice Department, and other federal and state law enforcement agencies in training them to identify fraud and catch white-collar criminals. Often, I refer cases to them as an independent whistleblower. In addition, I teach white-collar crime classes for various government entities, professional organizations, businesses, and colleges and universities. Recently, I've helped the AICPA Fraud Task Force develop better methods for detecting fraud.

I do not own any Herbalife securities long or short.
Posted by Sam Antar at May 19, 2014