My experience in dealing with former Utah Attorney General Mark Shurtleff goes way back. On October 30, 2007, Overstock.com (NASDAQ: OSTK) paid him $5,000 purportedly as a "campaign contribution." Two weeks later, Overstock.com issued a press release together with a defamatory "open letter" written by Shurtleff making baseless allegations against me. It was no coincidence. Instead it was a blatant effort by its CEO Patrick Byrne to get me to back off from investigating securities law violations and other illegal conduct by him and his company.

It was only a matter of time before the law caught up with Mark Shurtleff's pattern of soliciting and receiving illegal bribes in return for favors. Yesterday, he was arrested by FBI agents and local law enforcement along with another former Utah Attorney General John Swallow. The charges yesterday concern other donors, not Byrne. He may be protected by the statute of limitations, or maybe not. His behavior needs to be examined by the prosecutors in the Shurtleff-Swallow case. What we do know is that Shurtleff, judging from the indictment, was a lot dirtier than even my experience with him indicates.

According to the Salt Lake Tribune:

Shurtleff, who served 12 years as attorney general before making Swallow his handpicked Republican successor, was charged with 10 felony counts, including receiving or soliciting bribes, accepting gifts, tampering with witnesses and evidence, and participating in a pattern of unlawful conduct.


The news was no surprise to me and other long-time critics of Overstock.com. Since 2006, my blog has exposed lies to investors by Patrick Byrne dating back to 1999 and a series of illegal accounting maneuvers used by Overstock.com to materially overstate its earnings and report phony profits when it was losing money. My accounting analysis was proven correct by the company's later revisions of accounting practices and restatements of financial reports. In many cases, those corrections were forced upon it by the Securities and Exchange Commission. Back in October 2007, Patrick Byrne was desperate to discredit me, hoping I would quit investigating his illegal actions. Byrne went as far as to bribing then serving Utah Attorney General Mark Shurtleff to write a defamatory open letter about me that was republished by Overstock.com as part of a press release. 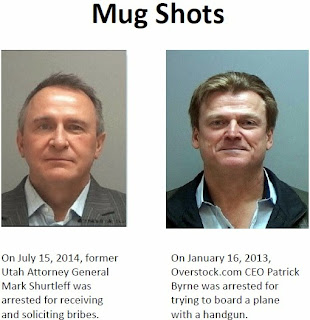 On October 30, 2007, Overstock.com made a $5,000 “campaign contribution” to Utah Attorney General Mark Shurtleff. However, Overstock.com did not publicly report the contribution until months later. A day later, I spoke at the conference. No one asked me about Overstock.com and I did not mention the company.

Praised for teaching at conference

I thought everything had gone well. I received nothing but praise from the Utah Attorney General’s office. The next day, Deputy Attorney General John Kimble sent me an email saying:

Thank you for giving such a dynamic and thought-provoking talk. I've received nothing but positive feedback. I hope you enjoyed your brief stay in Salt Lake. Also feel free to contact me if there's anything I can do for you in the future.

There was a "rock star" in a room full of "good guys" downtown today. It was a bad guy at the "White Collar Crimes Conference. The women auditors were almost in a swoon.

Sam Antar just explained how his family had skimmed $20 million off the top, and then made another $75 million from pumping and dumping Crazy Eddie, Inc. stock in the 1980s.

Chief Deputy Attorney General Kirk Torgenson was a sponge. "When you hear it from somebody who did it, it gives you insights into how they think," Torgersen (sic) said.

That was Antar's message. He says the way to crack down is with better auditing and policing. He also says his CPA license was just revoked; that should have happened 15 years ago.

To my surprise, on November 14, 2007 Overstock.com issued a press release together with an "open letter" from Utah Attorney General Mark Shurtleff. His letter claimed that I broke a purported agreement with his office. In the press release, Patrick Byrne ranted on about me somehow being involved in an illegal media conspiracy to take down his company:

"The letter from the Attorney General of Utah, which Sam has, for a week, ignored and refused to post to his blog as twice requested, speaks to Sam's perfidy," Byrne added. "The real investigative business journalists left in this country might explore whose interests are being served by the promotion of Sam Antar by CBS MarketWatch, Dow Jones, and Fortune."

As Utah Attorney General, I am writing this letter to rebut a blog Sam Antar posted on his website on November 1, 2007. I tried to post this letter as a comment on his blog but Mr. Antar apparently refused to post it….

I was warned that Mr. Antar might use this speaking engagement to suggest that my office or I personally, endorse or support his accusations against Overstock.com or some other public company. Based on that warning, officials in my office secured a promise from Mr. Antar that he would not use this invitation for that purpose. So much for the promises of a convicted felon! [Note: The open letter was erroneously dated a year later in 2008]

I certainly never agreed with you to not post on my blog. The agreement that we had was, was that we would not discuss any matters relating to Overstock.com at the meeting [my presentation at the Utah Attorney General’s 14th Annual White Collar Crime Conference], unless of course it was bought up and I complied with that agreement.

I fully agree. You did everything I asked you to do, Sammy.

It puts me in a bad spot as well because I disagree with him [Utah Attorney General Mark Shurtleff]…. What’s happening here has nothing to do with John [John Kimble, Deputy Attorney General] and I….

What is happening does not reflect my or John’s feelings, wishes, desires, or anything else. What you did is exactly what you promised to do for exactly the price you promised to do it at with no expense on our side and total expense on your side. You promised you would not open the Overstock door while you were here. You didn’t. I have absolutely no fault to you and I have nothing but praise from all the things I’ve read about your presentation….

No one consulted with me or John [Kimble]…. Here, I extend an invitation for you to come out here and do a presentation and you do exactly what it was I asked you to do. You do an excellent job of it and you know, and it makes me feel good, it makes the whole audience feel good, and then afterwards this whole thing happens and it kind of personally embarrasses me, too, at that stage because no one ever consulted with me or and John's, here saying….John here, agrees. To finish the thought, here we invite this poor guy to come out here. He comes out on his own dime and then we slap him in the face. Neither John nor I knew what was going on at the administrative level….


In a follow up phone conversation, Richard Hamp told me:

I am not going to argue any of the points Sammy. Sammy you did exactly what you said you would do for me. Kirk [Chief Deputy Attorney General Kirk Torgensen] even brought up the fact that Sammy agreed not to blog this. I said no, Kirk. We never had a discussion about blogs one way or the other. Sammy agreed he would not mention Overstock during...his presentations. He didn’t. You know. Just so Kirk was on the same page with me.

I am not going to misrepresent what our agreement was. Our agreement was that you wouldn’t mention Overstock while you were here. That was the end of the agreement. In all honesty, I didn’t even think about the blogs to even bring em up or mention em…. I've read it [your blog] and I don't have the same problem parts of my office do have with it....

I really feel bad about it, Sammy, because you did everything I asked you to do and I can’t fault you for any of this. Well there.

He [Utah Attorney General Mark Shurtleff] can apologize to you, but what kind of action do you want?


I demanded that Shurtleff's retraction to be “widely disseminated” in the same manner as Shurtleff's false allegations about me. However, in a follow up phone call, Kirk Torgensen backtracked and told me that Mark Shurtleff “may be stubborn on this thing” and offered an apology from the “Office” of the Utah Attorney General, rather than directly from Shurtleff himself:

Um, I gotta ask you this Sam. I mean, the Attorney General may be stubborn on this thing. What if I sent you something? …. Ultimately, this damage is my office…. That hurts the office, you know that Sam…. My job is to find a way to undo the harm…


A few days, later, Kirk Torgensen wanted me to be satisfied with only the private verbal apologies previously conveyed to me by Richard Hamp, John Kimble, and him. He told me, "Sam, you’ve gotten an apology from three people in my office." Mark Shurtleff never retracted his false remarks about me.

To this very day, Overstock.com proudly promotes Shurtleff's reckless lies about me on its website and from time-to-time Patrick Byrne stills refers to those lies in an effort to smear me. White-collar criminals usually don't stop doing crime unless they are caught and held accountable. It was only a matter of time before the law caught up with Mark Shurtleff and it's only a matter of time when the law will catch up with Patrick Byrne. For example, in January 2014 California Judge imposed a $6.8 million judgment against Overstock.com (NASDAQ: OSTK) for false advertising and unlawful business practices.

There is a saying, "It takes one to know one." I've provided professional work for the FBI, IRS, SEC, Justice Department, and other federal and state law enforcement agencies in training them to identify fraud and catch white-collar criminals. Often, I refer cases to them as an independent whistleblower. In addition, I teach white-collar crime classes for various government entities, professional organizations, businesses, and colleges and universities.

I do not own any Overstock.com securities long or short.
Posted by Sam Antar at July 16, 2014