Did Tesla violate S.E.C. rules by failing to disclose the retirement of George Blankenship?

Last Thursday, Silicon Beat reported that George Blankenship retired from his position as Vice President, Worldwide Retail at Tesla Motors (NASDAQ: TSLA). According to Blankenship's LinkedIn profile, he had already left the company in October 2013. Tesla's most recent proxy report listed Blankenship as a "named executive officer." The retirement, appointment, resignation, or termination of a registrant’s "named executive officer" is required to be disclosed within four business days of such a departure on Form 8-K. Therefore, it appears that the company should have disclosed his retirement no later than November 6, 2013. So far, Tesla has made no such disclosure.

Blankenship is still listed as Vice President, Sales & Ownership Experience on Tesla’s website. But his LinkedIn profile now says he is “Director of Smiles for the Blankenship Family” and he apparently left Tesla a few weeks ago.


Shortly after Silicon Beat's exclusive report, Blankenship's name was finally removed from Tesla's list of officers on its website.

George Blankenship's LinkedIn profile says he was employed at Tesla until October 2013 and was "done at Tesla" in November 2013. See below (click on image to enlarge): 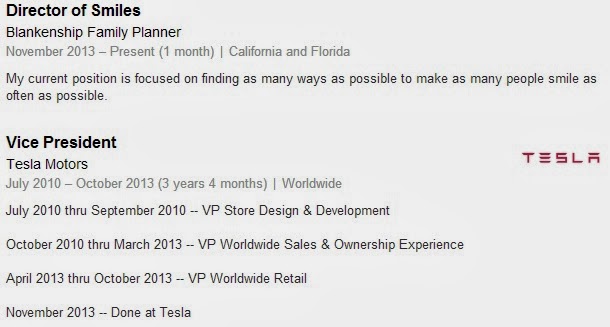 When Tesla finally gets around to filing an 8-K report, will it claim that Blankenship did not retire in October 2013 as he reported in his Linkedin profile? That seems to be the only way Tesla can claim that it did not violate S.E.C. disclosure rules governing the departure of a named executive officer.

There is a saying, "It takes one to know one." I've provided professional work for the FBI, IRS, SEC, Justice Department, and other federal and state law enforcement agencies in training them to identify fraud and catch white-collar criminals. Often, I refer cases to them as an independent whistleblower. In addition, I teach white-collar crime classes for various government entities, professional organizations, businesses, and colleges and universities. Recently, I've helped the AICPA Fraud Task Force develop better methods for detecting fraud.

I do not own any Tesla securities long or short.
Posted by Sam Antar at November 23, 2013