Is Medifast a Cry Baby or a Corporate Bully?

This is the way corporate bullying works. Last Monday, September 30, 2013, I reported that Medifast (NYSE: MED), its former CFO, and the engagement partner who supervised its audits for its former accounting firm agreed to the entry of separate Cease-and-Desist Orders by the Securities and Exchange Commission for various violations of securities laws. On Wednesday, October 2, 2013, I received a letter from its lawyers with the following barely veiled threat, “…The Company, is not adverse to taking decisive action to redress false accusations against its business.”

On September 19, 2013, Medifast (NYSE: MED) disclosed that on the previous day it consented to an entry of a Cease-and Desist Order and agreed to pay a $200,000 civil money penalty in connection with an "investigation" by the Securities and Exchange Commission into its improper financial reporting from 2006 to 2009. I reported that Medifast's press release and 8-K report made no mention that Brendan N. Connors, its former CFO and Marc G. Nochimson, the engagement partner who had supervised Medifast's audits for its former accounting firm, consented to the entry of separate Cease-and-Desist Orders which alleged improper conduct. Furthermore, I wrote that "I did not find any specific disclosure of the above referenced investigation in any of Medifast's previous filings with the S.E.C. I asked the company for an explanation via email, but it did not respond my request."

Therefore, I asked a reasonable question: "Was Medifast transparent with investors about an S.E.C. investigation?" based on underlying facts that were referenced in the S.E.C.’s three Cease-and-Desist Orders, Medifast’s S.E.C. filings and a certain press release). Medifast responded by having their lawyer Robert A. Giacovas send me a threatening legal letter. The letter cannot cite a single false or erroneous fact that it claims I published. Instead, it resorts to veiled threats, personal attacks, and innuendo in an attempt to distort the meaning of what I wrote and to bully me. [Read a copy of the letter from Robert A. Giacovas, Esq. here.]

Medifast's letter and my response

If I may be so bold as to summarize their lawyer’s letter, they are complaining that I “did not find any specific disclosure of the [SEC] investigation in any or Medifast’s previous filings with the S.E.C.” They claim “the Company cannot locate any email” from me asking them for an explanation. They requested that I forward them "the email that was supposedly sent to the Company and went unanswered." [Emphasis added.]

On September 20, 2013 at approximately 3:00 AM, I filled out an online inquiry for Medifast's Investor Relations Department:


See the screen shot below (Click on image to enlarge it): 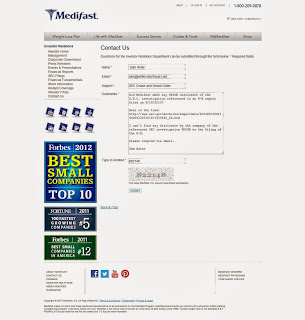 At about 3:01 AM ET, I received the following confirmation that my inquiry was received. See the screen shot below (Click on image to enlarge it): 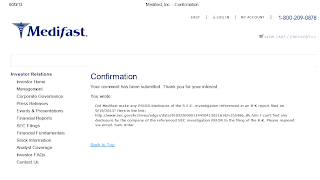 In addition, on September 20, 2013 at 4:41 AM ET, I sent an email to Medifast’s Investor Relations Department which made the same request: [Read the full email here.].


I’d appreciate a prompt answer to this question via email.


However, Medifast did not respond to me as of the time I published my blog 10 days later on September 30, 2013. If Medifast cannot find my online inquiry and email detailed above, I respectfully suggest that apparently either someone at the company is not being truthful to them or it has a problem with its information technology infrastructure.

Medifast's letter does not deny that it failed to report the existence of an S.E.C. investigation prior to the issuance of a Cease-and-Desist Order, press release, and 8-K filing. Instead, it explains that Medifast had no specific legal obligation to disclose such an investigation:

However, there is no statute, regulation, or rule that explicitly imposes an affirmative duty upon a public company to disclose the existence of an SEC investigation.

First, you state that you "did not find any specific disclosure of the [SEC] investigation in any of Medifast's previous filings with the SEC." The statement and your emphasis on the word "any" is clearly meant to convey that the Company has somehow not made proper disclosures to investors."

In addition, I reported that Medifast did not disclose in its press release and 8-K filing that its former CFO and the former engagement partner who supervised its audits also consented to the entry of separate Cease-and-Desist Orders. Their letter claims that I inferred that Medifast “purposely omitted mention of these other settlements." [Emphasis added]. As I detailed above, Medifast claimed that it had no specific legal obligation to report the S.E.C. investigation prior to it accepting the entry of a Cease-and Desist Order against it. Is Medifast now claiming it would have reported the other two Cease-and-Desist orders if they had known about them prior to its press release and filing of an 8-K report? If that is so, Medifast could have issued another press release and filed an amended 8-K report with the S.E.C. if it had chosen to do so. It did not.

The letter goes on to say that:

For your information, as a matter of policy, the SEC does not disclose the status of any investigations and settlement discussions with other potential parties (and it did not in this case).


The letter claims that:

The Company learned about details of those settlements at the same time as everyone else – when they were released by the S.E.C.

What further amuses me about Medifast's bullying is their lawyer's apparent blundering. For example, the letter states:

Your post, which begins with the question – “Was Medifast transparent with investors about an S.E.C. investigation?” – then contains a number of statements that answers the question in the affirmative, thereby raising specter of some improper conduct by Medifast surrounding the entry of a cease and desist order with the Securities and Exchange Commission (“SEC’). [Emphasis added.]


Apparently, the letter erroneously claims that I answered my own question “in the affirmative” which means that I implied that Medifast engaged in proper conduct while it goes on to erroneously claim that I answered the question in the negative, meaning that Medifast engaged in improper conduct. I'm confused by their language. A company can follow the letter of the law and still not be transparent as I understand the term to mean. In any case, I did not say that Medifast was transparent or that it was not transparent. I simply asked a reasonable question about whether Medifast was transparent with investors and published the underlying facts accurately to help readers reach their own conclusion.

The letter references a certain defamation lawsuit Medifast brought against "...your friend and twice convicted felon Barry Minkow and (others)." I thought Minkow was a friend, but he is no longer a friend anymore and he has not been a friend for years. In any case, Medifast's defamation lawsuit against Barry Minkow was dismissed, although it is appealing the ruling. (See 10-Q report - Contingencies on page 14.)

Finally, Medifast requested that “And if you are truly interested in full transparency, you should publish this letter for your readers.” Well, I am interested in transparency. I made an upload of their letter available in the first paragraph of this blog, provided links to it several times above, and it can be uploaded here, too. In the spirit of the First Amendment to the Constitution of the United States, I welcome the debate. Back in 2012, I defended a government employee's right to free speech after he was fired for saying personal insults about me:

When Antar was asked about the critique of his talk and Mr. Kaplan’s firing his reaction was, “He has every right to voice his opinion of me. It was wrong for the City of Philadelphia to fire him for what he said about me."


In my humble opinion, Medifast appears to be thin-skinned. They are acting like crybabies. However, Medifast, like me has a constitutional right to the freedom of speech. Their opinions like mine here have a right to be heard. However, I will not allow them to bully me.

There is a saying, "It takes one to know one." I've done professional work for the FBI, IRS, SEC, Justice Department, and other federal and state law enforcement agencies in training them to identify fraud and catch white-collar criminals. Often, I refer cases to them as an independent whistleblower. I teach white-collar crime classes for various government entities, professional organizations, businesses, and colleges and universities. Recently, I've helped the AICPA Fraud Task Force develop better methods for detecting fraud.

I do not own any Medifast securities long or short.
Posted by Sam Antar at October 03, 2013