In four of the last five quarters since the beginning of fiscal year 2011, Green Mountain Coffee’s (NASDAQ: GMCR) reported revenues exceeded the revenue guidance it gave investors just weeks before the close of each quarter. In those quarters, its inventory turnover should have increased compared to the same quarter of the previous year because it delivered more products than anticipated to its customers before the close of each quarter to meet unexpected excess demand. Instead, Green Mountain Coffee’s inventory turns decreased, reflecting a longer time to sell its inventory despite reporting revenues that exceeded it projections.

See the chart below and calculations here. Click on image to enlarge: 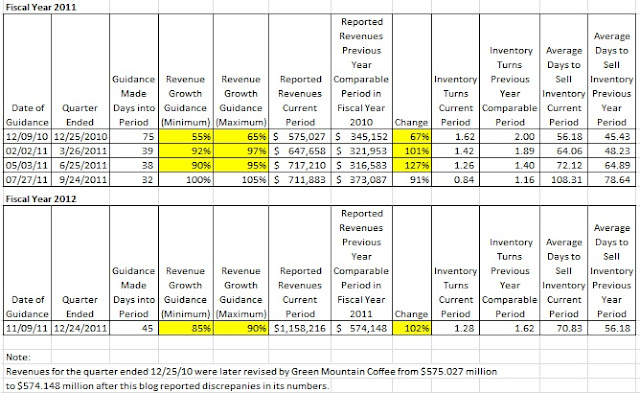 
On September 20, 2010, the Securities and Exchange Commission started a probe of Green Mountain Coffee’s accounting practices. Afterwards, the company restated its financial reports from fiscal year 2006 to fiscal year 2010 to correct certain violations of Generally Accepted Accounting Principles (GAAP). Those violations caused the company to overstate its reported earnings in previous fiscal years.

A class action lawsuit was filed against the company that cited information provided by over a dozen informants who allege that it manipulated earnings and committed securities fraud in fiscal year 2010 and prior years. The amended complaint cites certain forensic accounting analysis provided in this blog detailing violations of accounting rules by the company before and after the S.E.C. started its probe. In addition, it cites a scathing report issued by money manager David Einhorn and analysis provided in other financial blogs.

Excessive increases in inventory levels coupled with declining inventory turnover are generally considered to be a red flag for possible inflation of inventory numbers and overstatements of earnings among forensic accountants. In every quarter after the S.E.C. started probing Green Mountain Coffee's accounting practices, its inventory turns have decreased reflecting longer periods to sell its product, even in quarters where its revenues exceeded its projections.

There is a saying, "It takes one to know one." Today, I work very closely with the FBI, IRS, SEC, Justice Department, and other federal and state law enforcement agencies in training them to identify and catch white-collar criminals. Often, I refer cases to them as an independent whistleblower. I teach white-collar crime classes for various government entities, professional organizations, businesses, and colleges and universities. I do not seek or want forgiveness for my vicious crimes from my victims. My past sins are unforgivable.

I do not own any Green Mountain Coffee Roasters securities long or short.
Posted by Sam Antar at May 01, 2012