Is Michelle Stacy a shrewd insider, a psychic or just plain lucky?

Is Michelle Stacy a shrewd insider, a psychic or just plain lucky? Perhaps the people who designed and administer her purported 10b5-1 trading plan are geniuses?


Green Mountain Coffee Roasters Inc's (GMCR.O) shares fell as much as 4 percent after Starbucks Corp (SBUX.O) said it plans to announce a new product for the single-cup coffee market, a move that could threaten Green Mountain's dominance in the fast-growing sector.

The stock price of Green Mountain shares dropped to a low of $41.53 per share in intra-day trading.

At around 3:25 PM (Eastern) that afternoon, Green Mountain Coffee shares spiked up from just under $42 per share to $45 per share. See the Bloomberg chart below (times posted on chart are Central time):


At around 3:34 PM (Eastern) that afternoon, Reuters citing an unnamed source reported:

On September 20, 2010, Green Mountain Coffee claimed that it was notified by the Securities and Exchange Commission (SEC) of an informal inquiry concerning its “revenue recognition practices and the Company’s relationship with one of its fulfillment vendors.” However, the company did not disclose news of the SEC inquiry to investors until seven days later.

After the market closed on September 28, 2010, Green Mountain Coffee finally disclosed news of the SEC inquiry to investors. In addition, the company disclosed that it discovered an "immaterial accounting error" involving its K-Cup margin percentages which resulted in a $7.6 million cumulative overstatement of pre-tax income in financial reports issued from 2007 to June 26, 2010. A significant amount of those accounting errors came from the Keurig segment which is headed by Michelle Stacy.

On October 21, 2010, I raised questions about the timing of Michelle Stacy's stock sales.

On Thursday, March 10, 2011, Green Mountain announced a “strategic relationship” with Starbucks. In reaction to the news, the market value of Green Mountain Coffee common stock rose $21.07 per share to close at $61.71 per share, or a 46% increase from the prior day’s closing price. That same day, Michelle Stacy exercised 9,375 options at $6.20 per share and simultaneously sold them at $55.54 per share, $11.90 per share higher than the previous day's closing price per share.

Other Green Mountain insiders were not as fortunate as Michelle Stacy. MarketWatch reported:

SAN FRANCISCO (MarketWatch) —March 10 was options day for insiders at Green Mountain Coffee Roasters. Too bad it was the day the stock hit a record high and the options are presently worthless.

According to filings Friday afternoon with the Securities and Exchange Commission, eight directors were each granted 2,300 stock options at Thursday’s closing price of $61.71 a share — a record high on a split-adjusted basis. The previous day the stock had closed at $43.64. 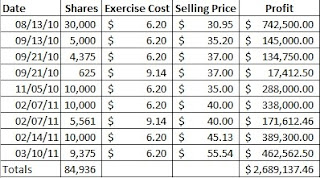 The amended class-action complaint alleges that Green Mountain Coffee knew that the SEC was poking around as early May 2010 or three months before Michelle Stacy claims she adopted a 10b5-1 trading plan. See paragraphs 68, 69, 103, and 104). If a corporate executive already has nonpublic knowledge of certain adverse events such as undisclosed weaknesses in internal controls, accounting errors, or an SEC inquiry, a 10b5-1 plan cannot provide a safe harbor against illegal insider trading allegations.

Every corporate insider should seek out who designed and administers Michelle Stacy's 10b5-1 trading plan and hopefully, they can be as lucky as she is. In any case, Stacy's got great timing!

There is a saying, "It takes one to know one." Today, I work very closely with the FBI, IRS, SEC, Justice Department, and other federal and state law enforcement agencies in training them to identify and catch white-collar criminals. Often, I refer cases to them as an independent whistleblower. I teach about white-collar crime for professional organizations, businesses, and colleges and universities.

I do not own any Green Mountain Coffee Roasters or Overstock.com securities long or short. My investigations of these companies are a freebie for securities regulators to get me into heaven, though I doubt I will ever get there. My past sins are unforgivable.
Posted by Sam Antar at March 24, 2011

What does the SEC have to say about this possible insider trading and fraud? Green Mountain Coffee has much to gain with a partnership with Starbucks, although I think Green coffee is much better than Starbucks anyway. - Love the blog too!

I like the coffee too, but not the financial disclosures and the timing of her stock sales.

Any recent updates to this story that you could write about please?