On June 30, 2010, Amedisys (NASDAQ: AMED) announced that it "received notice of a formal investigation from the Securities and Exchange Commission (SEC) pertaining to the company, and received a subpoena for documents relating to the matters under review by the Senate Finance Committee." The SEC investigation follows an April 2010 Wall Street Journal report questioning Amedisys’s Medicare reimbursement patterns and raising serious questions about possible abuse by the company of Medicare’s reimbursement system. In mid-June 2010, several class action lawsuits were filed against Amedisys alleging securities fraud, based on the Wall Street Journal report.

In my analysis below, I will provide additional troubling data and issues missed in the Wall Street Journal report and not cited in the various class action lawsuits for the SEC to consider in its investigation.

Therefore, the analysis below is based almost entirelry on Amedisys’s statistical data for base/start-up agencies to provide a consistent apple-to apples comparison of the data.

What explains the sudden increase in the growth of in base/startup Medicare episodic visits per admission? 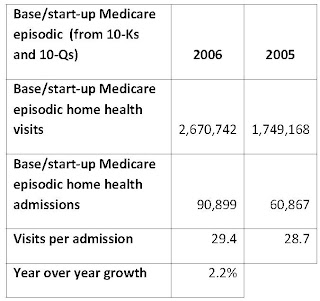 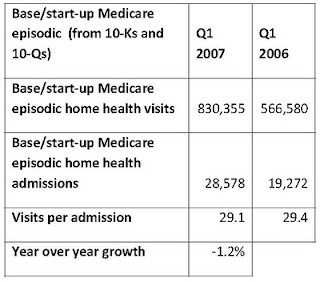 Starting in Q2 2007, however, the amount of base/start-up Medicare episodic visits grew much faster than admissions. By Q3 2009, base/start-up agencies reported an increase to 36.5 visits per admission, an all time-high for the company. See the chart below: 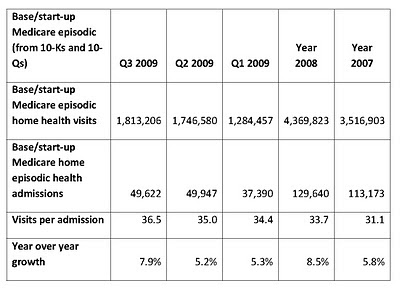 Why did the number of visits per Medicare admission at base/start-up agencies suddenly begin increasing at such dramatic rates starting in Q2 2007?

Why did recertifications skyrocket in 2007? 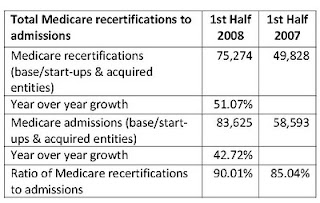 Why visits per Medicare admission suddenly begin declining in Q4 2009? 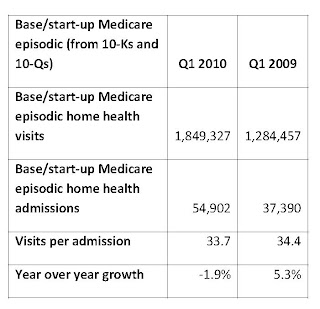 What explains this sudden trend reversal and does it have anything to do with the onset of scrutiny by journalists (such as the Wall Street Journal) or analysts (such as Citron Research)? 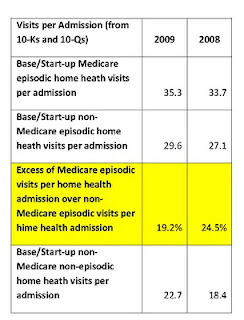 
Payments from Medicaid and private insurance carriers are based on episodic-based rates or per visit rates (non-episodic based) depending upon the terms and conditions established with such payors. Episodic-based rates paid by our non-Medicare payors are paid in a similar manner and subject to the same adjustments as discussed …for Medicare; however, these rates can vary based upon negotiated terms. 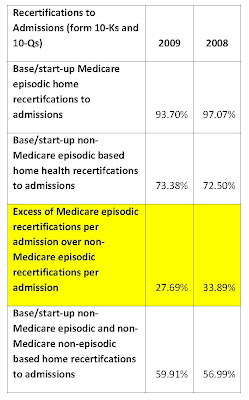 I also find it interesting that, during 2008, the ratio of recertifications to admissions for Medicare cases handled by base/start-up agencies was over 100%. See the chart below: 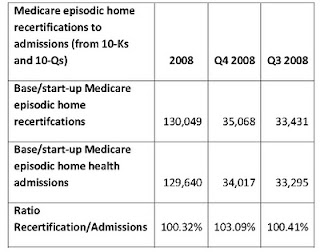 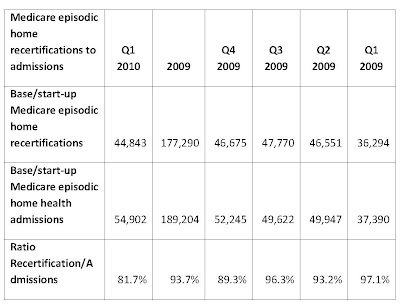 What explains the substantial decline in recertifications to admissions, particularly after Q3 2009? And did it have anything to do with increased scrutiny of the company’s published financial disclosures?

Sudden resignation of two high level executives coincides with the recent declines in visits and recertifications per Medicare admission. Is it purely coincidental?

On September 3, 2009, Amedisys President and COO Larry Graham and Alice Ann Schwartz, its chief information officer, suddenly resigned from the company. Amedisys provided no reason for their resignations and simply said that the two execs “are leaving the company to pursue other interests.”

In my experience, sudden, unexpected executive departures are often a sign of problems beneath the surface. And while it could be entirely coincidental, the trends at Amedisys appear to be consistent with my experience.

After the sudden resignation of Graham and Schwartz, the ratio of Medicare episodic recertifications to admissions dramatically dropped from 96.3% in Q3 2009 to 89.3% in Q4 2009 and to just 81.7% in Q1 2010. The number of visits per Medicare admission also began to decline, as I described earlier.

In the months before Graham's sudden departure from Amedisys, he unloaded over $2.6 million of stock. Was it shrewd timing in anticipation of a run to the exits before the fire bell sounded? In my world, I don't believe in coincidences.

I do not own Overstock.com, Bidz.com, or Amedisys securities long or short. My investigation of  those companies is a freebie to securities regulators to get me into heaven, though I doubt that I will ever get there. In any case, no good deed ever goes unpunished by the SEC. That's life.

I do not seek or want forgiveness for my vicious crimes from my victims. I plan on frying in hell with other white-collar criminals for a very long time.
Posted by Sam Antar at July 07, 2010