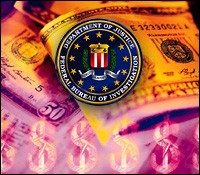 
Republicans can not beat Obama at the ballot box. But you can be assured that they will do all they can so that his legacy is terribly tainted in scandal. There is just no way the GOP will allow Obama to serve out eight years and leave office with a strong record of liberal accomplishment that he can hand over to a Democratic successor. Simply put, for Republicans, Barack Obama must be destroyed and completely invalidated before his term or terms are over.

Republicans will attempt to impeach Barack Obama. The “why” of the matter is completely insignificant. They’ll find something and work overtime to make it appear to be the Greatest Scandal Ever. It’s just a matter of time. Provided, of course, that they have the numbers.

Wolfrum referred to my concerns that excessive government spending on an unprecedented scale will no doubt lead to unprecedented levels of white-collar crime. I believe that the Republicans will exploit that issue, in any way possible, to bring down the Obama Administration, barring more serious efforts by the Administration to deter, prevent, and prosecute white-collar criminals. Yes, that's politics.


A while back, my friend Sam Antar – a former key player in the infamous and egregious “Crazy Eddie’s” fraud – told me that it was just a matter of time before Barack Obama faced impeachment charges.

“With all the stimulus money going out, the Republicans will eventually find some corruption charge they think will stick,” said Antar, now a corporate whistle-blower who tends to view things from a non-partisan prism. “It’s just a matter of time.”

In June 2009, I wrote an Open Letter to President Barack Obama warning him to be prepared for an unprecedented onslaught of white collar crime:


Within a couple of years, you can expect a massive crime wave on an unprecedented scale resulting from spending trillions of extra taxpayer dollars to stimulate the economy and bail out the financial sector in a relatively brief period of time. Not enough attention is being paid to effective internal controls to prevent such crimes. The FBI and other law enforcement agencies do not have enough resources to effectively investigate and prosecute such crimes.

The Republicans will run against you on a simple platform, “The Democrats are responsible for white-collar crime, corruption, and waste on an unprecedented scale.” The Republicans will say that you should have cut taxes and simplified the tax system to stimulate the economy and reduce the incentive for criminals to commit fraud.

Among the sources that I cited in making my case was a warning by FBI Director Robert Mueller:


Given the trillions and trillions of dollars involved in the government's current moves to stem the economic crisis, "from the purchase of troubled assets to improvements in infrastructure, health care, energy and education -- even a small percentage of fraud would result in substantial taxpayer losses."

We simply do not have enough resources to effectively investigate and prosecute most white-collar crimes and the criminals know it. White-collar crime investigations are increasingly complex cases that require enormous specialized resources and take long periods of time to successfully prosecute them.

For example, the Securities and Exchange Commission only employs about 3,642 employees to police our capital markets. The Internal Revenue Service only employs about 2,725 Special Agents to conduct criminal investigations into such crimes as tax evasion and money laundering and that number has remained flat for ten years. The FBI employs 13,492 Special Agents and not all of them are assigned to investigating white collar crime. By contrast, the New York City employs approximately 34,500 police in uniform to combat crime in a city of 8 million people. Therefore, the NYC Police Department has more cops in uniform than the combined amount of people employed by the SEC, criminal investigators at the IRS, and special agents at the FBI (34,500 compared to 20,859).

We can debate endlessly about the need for more regulation. However, the more important issue is that, we as a nation, simply do not have enough resources to combat white-collar crime and the criminals know it and are exploiting it.

If President Obama does not take further serious steps to significantly increase law enforcement resources, the Republicans will exploit the white-collar crime issue at election time. As I said before, "That's politics." However, it's not a political issue. It's a national economic security issue. White-collar crime poses a grave threat to the integrity of our free market economic system and our future prosperity as a nation.


Antar says. Criminals "don't go down without a fight, they don't fight fairly, and they are going to intimidate whistle-blowers — that's the nature of their game." To fight back, companies may need to raise the level of their own game, or say goodbye to losses that the ACFE says typically equal 5% of company revenue.

I do not seek or want forgiveness for my vicious crimes from my victims. I plan on frying in hell with other white-collar criminals for a very long time. Hopefully, President Obama will help send many more criminals to join me in hell.
Posted by Sam Antar at June 02, 2010