If You Question Medifast's Revenue Accounting, Expect a Subpoena Rather Than a Rebuttal 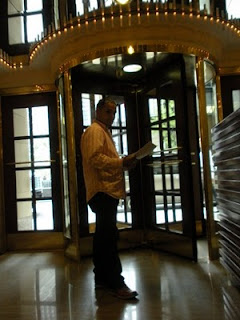 Rather than respond to my Open Letters to the Securities and Exchnage Commission raising serious questions about Medifast's (NYSE: MED) compliance with Generally Accepted Accounting Principles (GAAP) and SEC Topic 13 governing revenue recognition, the company has decided to subpoena me as a third party witness in its ongoing litigation with Fraud Discovery Institute, co-founded by convicted felon turned successful fraud buster Barry Minkow.

Starting in January 2009, Fraud Discovery Institute released a series of detailed investigative reports alleging potentially serious improprieties concerning Medifast's business model, marketing practices, and financial disclosures to investors in reports filed with the SEC. In addition, Barry Minkow openly disclosed that he has held a short position in Medifast securities, hoping to profit from the decline in the company's stock price (perfectly legal).

Back in 2007, Fraud Discovery alleged fraud at Usana (NYSE: USNA) and the company sued Minkow for libel. All the libel counts were thrown out by a federal judge who then ordered Usana to pay Minkow’s legal fees. Likewise, the defendants are confident that Medifast's lawsuit will be dismissed, too.

Rather than provide any detailed rebuttal of Fraud Discovery's allegations, Medifast CEO Michael C McDevitt has resorted to personal attacks against Minkow:


We believe most everything he says to be false and made for his own personal gain. He is a liar and can't be trusted.

Other than say that Fraud Discovery's allegations are false in its lawsuit and the press, Medifast has yet to provide a detailed line-by-line rebuttal of any allegation made in Minkow's reports. Minkow has asked for such a rebuttal and offered to correct any possible errors. What's Medifast afraid of?

Instead, Medifast has complained to the SEC and the regulator is now probing Minkow. Portfolio.com columnist Gary Weiss asked:


What in heaven’s name is the SEC thinking? Is it completely out to lunch?”


What is going on here? Well, I think what we may be seeing is a repeat of the Einhorn fiasco, and then some.

Both Einhorn and Minkow are short-sellers, profiting from their probes into the finances of companies. Short-sellers provide an undeniable benefit for the markets and perform a function that the SEC often fumbles: Shorts, and whistleblowers like Antar, police the financial statements of companies, providing a skeptical view of stocks that they believe are overvalued or otherwise flawed. Antar takes pride in the accounting goofs and crookedness that he has brought to the SEC’s attention, directly and through his blog.

SEC investigations are like unguided missiles. In case after case, the SEC usually ends up clearing whistleblowers like Minkow and Einhorn and finding securities violations committed by complaining companies.

The same happened with Overstock.com. The SEC cleared independent research firm Gradient Analytics and short seller Copper River Management, formerly Rocker Partners. Overstock.com and its CEO are under current investigation by the SEC as a result of GAAP violations exposed in this blog that caused the company to restate its financial reports for the third time in three years. (Read Richard Sauer's book entitled, "Selling America Short: The SEC and Market Contrarians in the Age of Absurdity.")

For Minkow to be wrong, Medifast has to prove that it is right and that's where the real fun begins. Medifast will have to put up or shut up and risks the SEC possibly finding Minkow's allegations of improprieties are correct.

In my case, Medifast remains strangely silent in responding to questions raised in my open letters to the SEC about the company's compliance with accounting rules governing revenue recognition. It looks like the folks at Medifast have no balls.

Likewise, I filed a whistleblower tip to the SEC and the regulator assures me that they will investigate Medifast's revenue accounting practices. I even got a thank you letter!

I posted this open letter on my blog simply because I could - for fun and enjoyment. In America, even convicted felons like me have rights under the First Amendment to the US Constitution. If anyone has any complaints, please ask your elected officials to change the Constitution, feel free to complain to the SEC, take other legal measures, or rant, yell and scream. I personally don't give a damn.
Posted by Sam Antar at June 22, 2010