A close examination of Overstock.com's (NASDAQ: OSTK) Q1 2010 10-Q report financial disclosures reveals that the company still failed to remediate serious material weaknesses in internal controls that have resulted in three restatements of financial reports in four years to correct GAAP violations. In addition, a close examination of the company's financial disclosures reveals serious questions about the quality of its reported Q1 2010 earnings of $3.7 million.

Each and every initial financial report for every reporting period issued by Overstock.com from the company's inception in 1999 to Q3 2009 violated GAAP or some other SEC disclosure rules. Likewise, every single audit report from 1999 to 2008 was wrong and every single Sarbanes-Oxley internal control certification signed by management turned out to be false, too.

In its Q1 2010 10-Q report, Overstock.com disclosed that the company has not remediated serious weaknesses in internal controls:

...the Chief Executive Officer (principal executive officer) and Senior Vice President, Finance (principal financial officer) concluded that our disclosure controls and procedures were not effective as of the end of the period covered by this Quarterly Report on Form 10-Q due to the following material weaknesses:

• We lacked a sufficient number of accounting professionals with the necessary knowledge, experience and training to adequately account for and perform adequate supervisory reviews of significant transactions that resulted in misapplications of GAAP.

• Information technology program change and program development controls were inadequately designed to prevent changes in our accounting systems which led to the failure to appropriately capture and process data.

As of March 31, 2010, we had not remediated the material weaknesses. [Emphasis added.]

Quality of Earnings Issues for Q1 2010

In Q1 2010, Overstock.com reported a net profit of $3.72 million compared to a net loss of $3.96 million in Q1 2009 or a $7.68 million improvement in earnings. However, Overstock.com's reported Q1 2010 $3.72 million profit was helped in large part by a $3.1 million reduction in its estimated allowance for returns or sales returns reserves when compared to Q1 2009 and other one-time profits as I will describe below.


It is normal for sales return reserves to drop from Q4 2009 to Q1 2010 "due to seasonality" issues such as decreased revenues from an earlier quarter (Q4 2009) compared to a later quarter (Q1 2010). However, in many cases such reserves drop due to changes from previous reserve estimates that artificially increase reported profits in later periods when such estimates are adjusted. 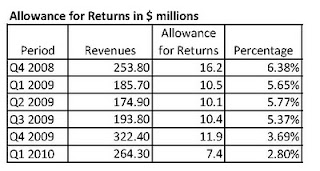 As the chart demonstrates, Overstock.com's reduction in allowances for returns may not be seasonal at all, but instead due to a change of estimate. As I detailed above, Overstock.com claimed that its reduction in sales return reserves was "primarily due to...seasonality" and the company did not claim any other factors such as operating improvements as a significant reason for the drop in reserves.

Other one-time items helped Overstock.com's reported Q1 2010 earnings, too:
Therefore, if Overstock.com's allowances for returns on a percentage of revenue basis remained constant at 5.65% from Q1 2009 to Q1 2010, the company would have reported a Q1 2010 profit of only $294k.

Another peculiar issue is that unlike previous reporting periods, Overstock.com failed to disclose the amount of inventory reserves at the end of Q1 2010.

In any case, based on Overstock.com's historical failure to produce financial reports free from material errors and GAAP violations, the company's Q1 2010 reported profit is highly suspect.

In its Q1 2010 10-Q report, Overstock.com disclosed loss contingencies that could put a big hole in its corporate pockets in future periods:
Update: In June 2010 or about a month after my this blog post was published, the SEC Division of Corporation Finance required Overstock.com to make the following additional disclosure about its loss contingencies:


Therefore, Overstock.com has total potential future losses of $9.13 million and has established reserves covering only $1.1 million of such potential losses. According to the company, the other unreserved loss contingencies are "reasonably possible; however, the reasonably possible exposure to losses cannot currently be estimated."

The Securities and Exchange Commission continues to investigate Overstock.com for GAAP violations, such as those issues described below.

In a series of blog posts during 2009, I accurately reported that Overstock.com deliberately violated GAAP in its accounting for recoveries from underbilled and overpaid fulfillment partners by improperly claiming that a “gain contingency” existed when it did not actually exist under accounting rules.

Under GAAP, Overstock.com is required to recognize income from underbilling and overpaying its fulfillment partners when such income was actually earned (before Q3 2008). By improperly claiming that a “gain contingency” existed, Overstock.com improperly recognized income as monies were recovered from the underbilled and overpaid fulfillment partners in future reporting periods on a non-GAAP cash basis.

I notified both the company and the SEC of Overstock.com's improper accounting for recoveries from underbilled fulfillment partners and later on, for overpaid fulfillment partners. Instead of properly complying with GAAP, Overstock.com CEO Patrick Byrne defamed me in various quarterly conference calls with analysts and investors and orchestrated a smear campaign to discredit me.

Patrick Byrne sent his paid stalker Judd Bagley to interfere with my divorce involving my ex-spouse and spy on my family (including minor nieces and nephews) using a fake Facebook name. The Big Picture (over 140k subscribers) blogger Barry Ritholtz labeled Judd Bagley "A career douche bag (and possible pedarast)" because of Bagley's efforts to stalk his children, my children, and the children of other Overstock.com critics on behalf of Patrick Byrne.

On January 29, 2010 Overstock.com finally ate crow and admitted that its accounting for recoveries from both underbilled and overpaid fulfillment partners was "inappropriate" and that no gain contingency existed, as I previously reported in my blog.

Aside from Overstock.com's serial GAAP violations, smoke and mirrors accounting, and stalking of critics and their families, just take another look at those scary images of Patrick Byrne and "possible pedarast" Judd Bagley above and think hard about trusting any financial reporting by this company.

In June 2010 or a month after this blog post was originally published, the SEC Division of Corporation Finance asked Overstock.com to explain, clarify, and revise certain financial disclosures. On October 30, 2010, this blog post was revised from its original version to its current form to reflect new information obtained from Overstock.com's responses to the SEC Division of Finance.

I am a convicted felon and a former CPA. As the criminal CFO of Crazy Eddie, I helped Eddie Antar and other members of his family mastermind one of the largest securities frauds uncovered during the 1980's. I committed my crimes for fun and profit and simply because I could.

I do not own Overstock.com securities short or long. My research on Overstock.com and in particular its lying CEO Patrick Byrne is a freebie for securities regulators and the public in order to help me get into heaven, though I doubt that I will ever get there anyway because my sins are unforgivable. I expect Overstock.com CEO Patrick Byrne and "possible pedarast" Judd Bagley to join me to fry in hell. In any case, analyzing the company's financial reporting is a forensic accountant's wet dream.
Posted by Sam Antar at May 05, 2010