Open Letter to KPMG: The Ties That Bind Overstock.com and Patrick Byrne With Deep Capture LLC

You must investigate Overstock.com’s (NASDAQ: OSTK) relationship with Deep Capture LLC as part of your continuing audit of the company and take steps to require management to make disclosures under Statement of Financial Accounting Standards No. 57 (SFAS No. 57) governing "Related Party Disclosures."

At the direction of Overstock.com CEO Patrick Byrne, the company has used Deep Capture's resources, such as its web site, as a conduit to intimidate, harass, threaten, smear, and pre-text company critics. For example, Deep Capture Managing Partner Judd Bagley violated Facebook's Statement of Rights and Responsibilities and deceptively posed as "Larry Bergman" in an effort to gather personal information and spy on Overstock.com 's and Patrick Byrne's critics, including me (See Item 3 Safety and Item 4 Registration and Security).


If the above claimed risk factor is actually for real, Overstock.com has failed to disclose a more likely and significantly more material risk factor: the fact that certain predatory and retaliatory actions taken by Deep Capture managing partner Judd Bagley, such as pre-texting of company critics, at the direction and blessing of Patrick Byrne may lead to "increased regulatory scrutiny" of the company and significant material legal liabilities in the future. To date, Overstock.com has not disclosed to investors its close financial relationship with Deep Capture LLC anywhere in financial reports filed with the Securities and Exchange Commission.

SEC Staff Accounting Bulletin No. 99 (SAB No. 99) "Materiality" notes that:

a substantial likelihood that the . . . fact would have been viewed by the reasonable investor as having significantly altered the "total mix" of information made available.


As I will describe below, investors relying on Overstock.com's financial reports are being kept in the dark about the relationship between Overstock.com and Deep Capture LLC and the potential material legal consequences of the company's use of Deep Capture as a platform to attack its critics. Deep Capture LLC is in substance an affiliate of Overstock.com and is in substance controlled by the company, despite certain legal maneuvers made to disguise the true nature of the relationship between the entities. First, let's review certain accounting standards on "related party disclosures."

Statement of Financial Accounting Standards No. 57 (SFAS No. 57) entitled "Related Party Disclosures" provides some "examples of related party transactions" such as:

transactions between... (d) an enterprise and its principal owners, management, or members of their immediate families; and (e) affiliates.


SFAS No. 57 defines an affiliate as:

A party that, directly or indirectly through one or more intermediaries, controls, is controlled by, or is under common control with an enterprise.


In addition, SFAS No. 57 defines control as:

The possession, direct or indirect, of the power to direct or cause the direction of the management and policies of an enterprise through ownership, by contract, or otherwise.


Furthermore, SFAS No. 57 defines related party transactions to include "services received or furnished" between such related entities. Deep Capture LLC furnishes services to Overstock.com in the form of retaliation against company critics.

On April 17, 2008, investigative journalist, bestselling author, and blogger Gary Weiss reported that Deep Capture LLC is controlled by High Plains Investments LLC which is 100% owned by Patrick Byrne and owned 23.5% of the Overstock.com's common shares (See Proxy Report). See the filing below (Click on image to enlarge):

Later in his blog post, Gary Weiss noted that the Deep Capture website was registered by Patrick Byrne and is "operated over Overstock servers." See below (click on image to enlarge). 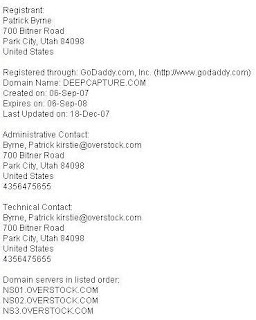 On June 19, 2008, Gary Weiss reported that Patrick Byrne took steps to conceal his ownership and control of Deep Capture by substituting High Plains Investments LLC as a principle with two former Overstock.com employees: Judd Bagley and Evren Karpak. See the filing below (Click on image to enlarge): 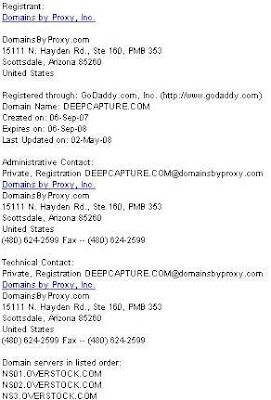 Most, if not all, of the funding for Deep Capture LLC comes from Overstock.com which is controlled by Patrick Byrne and directly from Byrne himself. As I described above, two of its managing partners, Judd Bagley and Evren Karpak, are former Overstock.com employees. Patrick Byrne claims to moonlight as a "journalist" for Deep Capture. Mark Mitchell has described Byrne as a "business associate."

A January 12, 2010 article in the New York Observer quoted Patrick Byrne as saying:


Examples of how Overstock.com and Patrick Byrne use Deep Capture as a platform to attack critics of the company

On October 31, 2009, I sent Patrick Byrne an email and asked to participate in Overstock.com’s Q3 2009 earnings call, so I could ask questions about Overstock.com's violations of GAAP and other SEC disclosure rules. In response, Patrick Byrne responded with an angry anti-Semitic diatribe, called me a “gonif” (Hebrew/Yiddish word for thief), and posted my email on the Deep Capture website, despite previous claims that Deep Capture is unrelated to Overstock.com (See Gary Weiss blog for more details).

On November 18, 2009, I sent Patrick Byrne another email asking to participate in Overstock.com's Q3 2009 conference call where it was going to discuss its filing of an "unreviewed" 10-Q. Again, Byrne posted my email on his Deep Capture site and again referred to me as a "gonif." 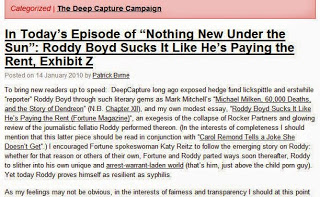 If Deep Capture is "not part of Overstock" as it claims:

1. Why did Patrick Byrne post on the Deep Capture web site my emails to him asking to participate in various Overstock.com conference calls and personally attack me with anti-Semitic slurs?

2. Why did Patrick Byrne have to respond to Roddy Boyd's requests for information on Overstock.com's failure to disclose certain material information and a tax dodge scheme by posting his vile rant on Deep Capture?

Certainly, the above issues relate to Overstock.com.

Why is Judd Bagley so afraid to answer such questions about Patrick Byrne's activities at Deep Capture?

Apparently, Judd Bagley does not want to answer any questions because it is not in his interests or the interests of his real employers, Overstock.com and Patrick Byrne.

As I will describe below, Deep Capture LLC is a corporate public relations entity doing Overstock.com's bidding by attacking critics of the company.

The Society of Society of American Business Editors and Writers denied Deep Capture membership to its organization because Patrick Byrne's activities as a self-proclaimed "journalist" and "those of DeepCapture seem closer to corporate public relations." See the email below posted by Byrne on Deep Capture's website (Click on image to enlarge): 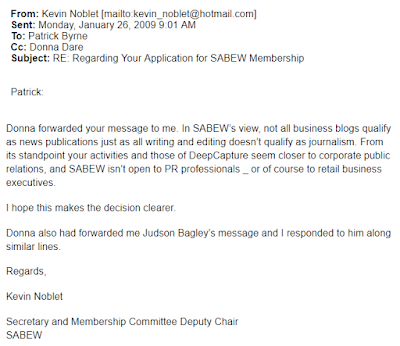 As I described above, Overstock.com and Deep Capture LLC service each other hand-in-hand. Overstock.com and Patrick Byrne provides just about all of Deep Capture's funding. Steps were taken to conceal the true nature of the relationship between the two entities.
Statement of Auditing Standards No. 45 (SAS No. 45) cautions that:


Therefore, KPMG should examine the substance of the relationship between Overstock.com and Deep Capture LLC and not be fooled by the smoke and mirrors used by Patrick Byrne to conceal his control over Deep Capture.

In addition, SFAS No. 57 cautions that:

Transactions between related parties are considered to be related party transactions even though they may not be given accounting recognition. For example, an enterprise may receive services from a related party without charge and not record receipt of the services.


Even if Overstock.com does not directly compensate Deep Capture LLC to carry out its agenda, Deep Capture is providing services in the form of issuer retaliation against critics of the company and those services are considered "transactions between related parties" under accounting rules. Those services are funded by Overstock.com through commissions and by Patrick Byrne, simply by writing out a personal check.

Please note that this open letter has been sent to the Securities and Exchange Commission to assist it in its investigation of Overstock.com.

January 25, 2010: Open Letter to KPMG: A Warning About Overstock.com, Your New Audit Client

I do not own Overstock.com securities short or long. My research on Overstock.com and in particular its lying CEO Patrick Byrne is a freebie for securities regulators and the public in order to help me get into heaven, though I doubt that I will ever get there anyway. I will probably end up joining corporate miscreants such as Patrick Byrne in hell. In any case, exposing corporate crooks is a lot of fun for a forcibly "retired" crook like me and analyzing Overstock.com's financial reporting is a forensic accountant's wet dream.

KPMG has sponsored at least two of my free speaking engagements to universities and colleges.
Posted by Sam Antar at January 27, 2010