Yesterday, Overstock.com (NASDAQ: OSTK) announced that it missed the Securities and Exchange Commission deadline for the filing its Q3 2009 financial report on time. The company disclosed:


We don't know whether or not Overstock.com has disclosed yet another violation of Generally Accepted Accounting Principles (GAAP) due to its carefully worded and vague disclosure. It's possible that Overstock.com is referring to its improper treatment of a previous accounting error to establish a "cookie jar" reserve to manipulate future earnings that was exposed in this blog or the company's failure to properly correct an overbilling from a freight carrier (more details below). Both issues are now being investigated by the SEC Enforcement Division.

In response to an email inquiry by me, CEO Patrick Byrne refused to comment citing Regulation FD. I suggested that Overstock.com clarify the issue for the benefit of investors in a press release, given his concerns about violating Regulation FD.

Company had expected to file 10-Q by SEC deadline

In last week's Q3 2009 conference call, held on November 3, company President Jonathan E. Johnson told investors that he was expecting to file 10-Q report by the deadline on Monday, November 9:

Lastly, we expect to file our Form 10-Q for Q3, 2009 by next Monday and I encourage all of you to read it as well for additional information on our financial results.


In a press release issued prior to the Q3 2009 conference call, Overstock.com disclosed a new parallel investigation by the SEC Division of Corporation Finance into its 2008 Form 10-K/A (amended 10-K report) and its June 30, 2009 Form 10-Q. The company did not disclose the specific nature of that inquiry. However, Overstock.com did say that it would disclose the specific nature of the SEC Division of Corporation Finance inquiry after issues were resolved with them. In any case, the company expected to file its Q3 2009 10-Q report on time (by the November 9 deadline).

Apparently, there is a material dispute either between Overstock.com and its auditors and/or Overstock.com and the SEC Division of Corporation Finance over the proper treatment for the "the proper accounting treatment for $785,000 the registrant received during the first quarter of 2009 as repayment under a new agreement with the vendor for amounts the registrant overpaid to the vendor in 2008 and early 2009." That material dispute is preventing Overstock.com from filing its Q3 2009 on time, as the company had expected.

In any event, Overstock.com faces a possible restatement of financial reports going back to 2003 due to its improper use of a "cookie jar" reserve used to materially inflate its financial performance in Q4 2008, Q1 2009, and Q2 2009. In addition, the company's failure to properly correct an overbilling error from a freight carrier may result in additional restatements on Q4 2008 and Q1 2009 financial reports. More details are provided below.

A history littered with violations of GAAP and SEC disclosure rules

However, Overstock.com continued to violate GAAP. The company's restatement of financial reports caused by its customer refund and credit errors did not include corrections relating to underbilled offsetting costs and reimbursements that were earned from its fulfillment partners in the corresponding periods. Instead, Overstock.com falsely claimed that a “gain contingency” existed and improperly reported such income on a non-GAAP cash basis in future accounting periods as amounts due from its fulfillment partners were collected.

For example, if Overstock.com would have properly followed GAAP and restated its financial reports its underbilling errors to fulfillment partners, in Q4 2008 the company:

Any one of the above three materiality yardsticks should have triggered a restatement of prior year's effected financial reports under SEC Staff Accounting Bulletin No. 99.

In Q1 2009, Overstock.com continued to improperly recognize income from previously underbilled fulfillment partners on a non-GAAP cash basis as such amounts were collected from them and the company materially reduced its reported losses.

In Q1 2009, Overstock.com disclosed yet another material accounting error because a freight carrier overbilled the company "several hundred thousand dollars" in Q4 2008," according to remarks made by CEO Patrick M. Byrne during the Q1 2009 earnings call. The company did not restate its Q4 2008 financial report to correct that error as required by GAAP and it instead improperly reduced reported losses for Q1 2009.

See the chart below for the combined impact of the company's accounting errors (Click on image to enlarge): 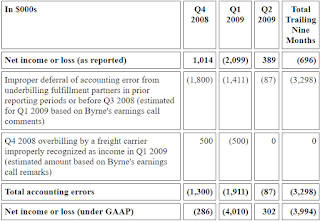 (1) The improper recognition of underbilled amounts due from fulfillment partners as they were collected on a non-GAAP cash basis and (2) Overbilling of Overstock.com by a freight carrier.

As I discussed above, it is unclear whether or not Overstock.com's improper accounting treatment of underbillings to fulfillment partners or its overpayment to a freight carrier is related to the company's decision to postpone filing its Q3 2009 10-Q.

In July 2009, Overstock.com disclosed that it improperly issued an extra 201,421 unregistered shares of common stock in connection with the company’s 401-K Plan.
Parallel SEC investigations

On November 3, 2009, Overstock.com disclosed a new inquiry by SEC’s Division of Corporation Finance regarding its 2008 Form 10-K/A (amended 10-K report) and its June 30, 2009 Form 10-Q. The company did not disclose the specific nature of that inquiry.

Overstock.com is desperately trying to avoid a third restatement of its financial reports in three years

Early on, the company was alerted by me that it is required by GAAP and SEC disclosure rules to restate its financial reports to correct errors from underbilling its fulfillment partners and its overpayment to a freight carrier. However, Overstock.com is stubbornly forcing the Securities and Exchange Commission to take enforcement action to make its financial reports comply with GAAP.
On October 26, 2009, Overstock.com filed a registration statement in connection with its 2005 Equity Incentive Plan incorporating by reference its 2008 10K/A report that includes material violations of GAAP. The SEC Division of Corporation Finance is reviewing that 10-K/A report.

On November 3, 2009, Overstock.com released its Q3 2009 financial reports, but the company failed to restate its previously issued financial reports to comply with GAAP. As described above, the incorporation of those financial reports in Overstock.com's Q3 2009 10-Q has been delayed because of questions about the "proper accounting treatment for $785,000 the registrant received during the first quarter of 2009 as repayment under a new agreement with the vendor for amounts the registrant overpaid to the vendor in 2008 and early 2009."

Birds fly east from Overstock.com's Salt Lake City headquarters to New York's Central Park. Antar likes talking to the pigeons by day and the owls by night. You forewarned to shed your ego driven paranoid fantasies and comply with GAAP and SEC disclosure rules. I play poker with a marked deck. Stay tuned....

I do not own Overstock.com securities short or long. My research on Overstock.com and in particular its lying CEO Patrick Byrne is a freebie for securities regulators and the public in order to help me get into heaven, though I doubt that I will ever get there anyway. I will probably end up joining corporate miscreants such as Patrick Byrne in hell. In any case, exposing corporate crooks is a lot of fun for a forcibly "retired" crook like me.
Posted by Sam Antar at November 10, 2009