In this blog post, I will provide evidence of what I believe is a stock market manipulation scheme involving InterOil (NYSE: IOC), John Thomas Financial, and Clarion Finanz AG. I believe that InterOil with the assistance of Clarion Finanz concealed John Thomas Financial’s involvement in helping it raise $95 million through a private placement of convertible debt securities.

Carl Caserta, who in 1991 was barred by the Securities and Exchange Commission from “association with any broker, dealer, or investment advisor” played a role in helping InterOil use John Thomas Financial to obtain funds from investors. InterOil, John Thomas Financial, and Clarion Finanz concealed Caserta's role in helping the company raise $95 million in convertible debt.

Right after John Thomas Financial started pumping InterOil shares to investors, without making conflict of interest disclosures, InterOil common shares traded over $32.50 per share for fifteen consecutive days, enabling the company to force the conversion of all convertible debt to equity. Clarion Finanz is a major shareholder of InterOil and the value of its stock holdings rose as a result of the illegal scheme.

My conclusions are based on a two month investigation by convicted felon turned fraud fighter and short seller Barry Minkow (co-founder of the Fraud Discovery Institute) with additional research assistance from me.

Evidence of the stock market manipulation scheme was pieced together from InterOil filings with the Securities and Exchange Commission. I compared InterOil financial disclosures with Court filings and affidavits involving a lawsuit brought by William Ziegler against John Dolan and two of his entities (Carey International Ltd and John Thomas Structured Finance - unrelated to John Thomas Financial above).

Dolan had assisted InterOil in raising funds for the $95 million convertible debenture private placement and raised $20 million from Ziegler. However, Ziegler's lawsuit claims that he is owed certain fees from Dolan and his companies.

In addition, I obtained certain documentation from reliable sources that confirms my belief of a stock market manipulation scheme between InterOil, Clarion Finanz, and John Thomas Financial. That documentation was delivered by me to securities regulators.

Details of the scheme are below.

InterOil required a $95 million cash infusion to pay back $70 million of debt still due to Merrill Lynch by May 12. In addition, the company needed to raise an additional $25 million of working capital to fund its operations. As of March 31, 2009, InterOil reported working capital of only $61.2 million and paying back such debt would have wiped out its working capital (See Consolidated Balance Sheet).

The company prepared to raise that $95 million through a private placement of convertible debt securities. Reliable information received by me and passed on to securities regulators, shows that InterOil initially sought the help of John Thomas Financial, who in turn brought in Carey International to assist the company in raising funds. According to court documents filed in the Ziegler lawsuit, John Thomas Financial received a "royalty fee" or finder's fee from Carey International.

According to the New York Times, "InterOil has obtained millions of dollars in loans from Clarion Finanz AG, the investment firm of Carlo Civelli, a Swiss businessman who has worked with Mr. Mulacek since 1996 as an investor or adviser." Carey International and its principal John Dolan did not know that they were being used as buffer as part of a stock market manipulation scheme.

Other information obtained by me and passed on to securities regulators show that Carl Caserta played a role in helping the InterOil with the assistance of John Thomas Financial raise $95 million in convertible debt. In 1991, Caserta was barred by the Securities and Exchange Commission from “association with any broker, dealer, or investment advisor."

In a previous blog post, I detailed how in New York Times in 2007 reported that, Caserta "stopped working for InterOil" in 2005. According to the article, InterOil claimed that it "was not aware of Mr. Caserta's history when he was retained." However, an investigation by Fraud Discovery Institute co-founder Barry Minkow revealed that Caserta retained an active email address at InterOil up to the day of my blog post.

By May 12, 2008, John Dolan and his company Carey International raised $20 million in funds from William Ziegler for the $95 million private placement of convertible debentures. (Note: As described above, in September 2008, Ziegler sued Dolan and his companies claiming that he was owed part of their fees.)

On May 12, 2008, InterOil announced a private placement of $95 million in convertible debt securities to institutional investors and issued the following press release:

INTEROIL ANNOUNCES $95 MILLION PRIVATE PLACEMENT
May 12, 2008 — InterOil Corporation (IOL:TSX)(IOC:AMEX) (IOC:POMSoX), a Canadian company with operations in Papua New Guinea, announced that it has closed on gross proceeds of US$95 million from the sale to institutional investors of 8% Subordinated Convertible Debentures due 2013. InterOil used the proceeds today to fully repay all outstanding indebtedness (US$70 million) under its credit facility with Merrill Lynch Capital Corporation. InterOil will use any remaining proceeds to drill and develop oil and gas wells on the Elk/Antelope structures in Papua New Guinea and for general corporate purposes.

The Convertible Subordinated Debentures carry an 8% coupon rate with a conversion price of US$25.00 per share. In some cases, interest payments may be made in common shares. If the daily volume-weighted average price of the Company’s common shares equals or exceeds US$32.50 for at least 15 consecutive trading days, InterOil may require the investors to convert the debentures into common shares. InterOil may also be required to repurchase the debentures for cash, at 101% of the face value plus accrued and unpaid interest, upon the occurrence of certain change of control events.


The $5.7 million finder’s fee payable to Clarion Finanz was not disclosed in Interoil’s press release detailed above.

However, Court documents show that InterOil had prior knowledge that such commissions or finder's fees were paid despite the company's failure to disclose them in its May 12 press release and May 28 Form D filing with the SEC. According to an affidavit filed by Neil Dolinsky (InterOil Special Projects Manager) in connection with Ziegler's lawsuit against Dolan and his companies, InterOil agreed to pay Clarion $5.7 million in convertible securities for its role in helping the company raise $95 million in its private placement of convertible securities and that “IOC issued to Clarion 228,000 restricted shares of its common stock as a finders fee, valued at $25 per share, equating to a total value of $5.7 million."

In addition, InterOil knew of the separate agreement entered into between Clarion Finanz and Carey International before its press release and SEC Form D filing. According to that agreement, Carey International was required to pay a "royalty fee" or finder's fee to John Thomas Financial.

In InterOil's 2008 annual report, the company finally disclosed that it paid $5.7 million pursuant to the $95 million convertible debenture offering without mentioning Clarion and cleverly tried to hide such fees as payments to investors (See footnote 23):


However, $1.1 million of such fees were not paid to "investors" as claimed by InterOil and was instead paid directly to Carey International and John Thomas Financial. Neither John Dolan nor Carey International invested any money in InterOil and therefore, such fees cannot possibly be a part of the $5,700,000 paid to “investors.” Yet, that is exactly where Mr. Dolan’s 44,000 shares, valued at $1.1 million, came from. Ultimately, Carey's shares were divided up into 35,200 shares made payable to Cary International (John Dolan’s group) and 8,800 shares John Thomas Financial (as a royalty fee).

In addition, InterOil provided no disclosure of Clarion’s role in the transaction, unlike other material disclosures relating to Clarion such as on:


Interoil’s “Annual Report Form” lists various disclosures under the caption, “Material Contracts.” However, InterOil omitted any disclosure relating to Clarion's roles in the $95 million private placement while disclosing Clarion's role in other transactions.

Our favorite stock is something called InterOil which I recommended on the air before.
Note: Above quote appears 3 minutes and 55 seconds into video clip.


Worst yet, 4 minutes and 6 seconds into the video clip, CNBC shows a screen called "Analyst Disclosure" that checks off the following items as "no."

Stock Ownership: No
Analyst: No
Analyst's Family: No
Analysts's Firm > 1%: No
Investment Banking Client: No
Other Conflicts: No
[Emphasis added.]


See the image below: 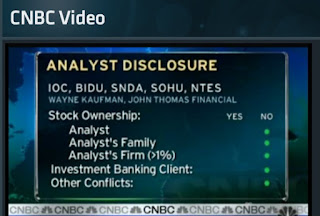 Contrary to the disclosure above on CNBC that John Thomas Financial had no investment banking relationship with InterOil, such relationship was cleverly hidden by InterOil using Clarion Finanz AZ as a buffer to raise $95 million for its private placement and have Clarion deal with John Thomas Finance through Carey International.

On May 1, 2009, John Thomas Financial issued a press release touting Wayne Kaufman’s CNBC appearance and featuring his InterOil recommendation without disclosing their broker/dealer relationship with InterOil that was cleverly disguised by false SEC filings as detailed above.

When asked if this market will keep going, Kaufman remarked that he sees "Nothing that says we can't keep going up. Sellers don't seem to be around and Governments around the world are pumping money into the market. I am looking for a continuation of stocks that have been strong in the tech and energy areas such as Interoil Corp, Symbol IOC on the NYSE."

Thomas Belesis, Founder and CEO of John Thomas Financial, commented, "When the public needs great information they call on the years of experience, technical and analytical skills of Mr. Kaufman."

Kaufman authors the popular daily market letter, "The Kaufman Report," which includes technical and fundamental analysis of the U.S. equities markets, general investment philosophies and reviews of prevailing political, economic and business trends that are impacting the financial markets.

With over 10 years experience as a technical and fundamental market analyst with several Wall Street firms, Kaufman has been widely quoted in the financial media, including CNBC, Bloomberg Radio, Barron's and the Wall Street Journal. Holding the designation of Chartered Market Technician (CMT) and a licensed Research Analyst, Kaufman has served as an online instructor teaching CMT candidates "Level 3" coursework for the Market Technicians Associations (MTA), the leading national organization of technical analysts in the United States. The MTA's CMT program is considered the industry's gold standard in technical analysis. Kaufman graduated from the University of Michigan where he earned a Bachelors degree in Liberal Arts.

John Thomas Financial, member of the FINRA and SIPC, is an independent broker dealer and investment banking firm headquartered in New York City's Wall Street district, with a growing network of branch offices throughout the country. Emphasizing a client-centric approach to managing all aspects of its business, the firm offers a full complement of retail brokerage and corporate advisory services tailored to the unique needs of its clients. For more information on the firm, please visit http://www.johnthomasbd.com/ or contact our strategic business development center below. [Emphasis added.].

The $95 million convertible debt private placement had called for a forced conversion of the debt to equity by InterOil under certain circumstances. According to InterOil’s May 12, 2008 press release about the convertible debt:

The Convertible Subordinated Debentures carry an 8% coupon rate with a conversion price of US$25.00 per share. In some cases, interest payments may be made in common shares. If the daily volume-weighted average price of the Company’s common shares equals or exceeds US$32.50 for at least 15 consecutive trading days, InterOil may require the investors to convert the debentures into common shares.


On May 22, 2009, InterOil announced the forced conversion of the its convertible debentures to equity, exactly 15 trading days after John Thomas Financial issued a press release touting Wayne Kaufman’s appearance on CNBC where he called InterOil, “Our favorite stock” without disclosing any prior relationships between the companies.

For other details of Fraud Discovery Institute's investigation of InterOil, please visit InterNoOil.com.
To be continued....

I am a convicted felon and a former CPA. As the criminal CFO of Crazy Eddie, I helped Eddie Antar and other family members mastermind one of the largest securities frauds uncovered during the 1980s. I pleaded guilty to three felonies.