The SEC stands by while Overstock.com continues to violate Regulation G and overstates EBITDA in latest report

Before we begin let's review some of Overstock.com's history of false and misleading disclosures

Overstock.com (NASDAQ: OSTK) CEO Patrick Byrne likes to call himself a “humble servant” to his company's shareholders and a “market reform advocate” to the investing public, while he and his company have a documented long history of false and misleading disclosures and utterly despicable behavior such as stalking and smearing critics with its in-house black ops team. As previously detailed in this blog, from December 2000 to March 2002, Patrick Byrne had lied about Overstock.com being profitable when the company was never profitable at that time.

Overstock.com’s unprincipled management team intentionally violated GAAP in reporting revenues from at least fiscal year 2000 until the SEC Division of Corporation Finance recently forced the company to report revenues in compliance with GAAP. To make matters worse, the company misled the SEC Division of Corporation Finance about the materiality of its revenue accounting errors and therefore violated Statement of Accounting Standards No. 154 by not restating prior period financial statements to correct its revenue accounting errors. In fact, Overstock.com has had only two profitable quarters (Q4 2002 and Q4 2004) in its entire history. At least one of those quarters earnings were materially overstated as a result of Overstock.com's intentional revenue accounting errors that were uncovered by the SEC. To make matters even far worse, as detailed many times in this blog dating back to November 2007, when it comes to non-GAAP disclosures, Overstock.com has continually violated SEC Regulation G and overstated EBITDA in its financial reports filed with the SEC from Q2 2007 forward.

Apparently, Patrick Byrne and his management team feel that they can make their own accounting and SEC disclosure rules on the fly - GAAP and SEC disclosure requirements be damned. In the mean time, the SEC sits by idly while Overstock.com distorts its financial performance to investors.
Overstock.com’s continued material violations of SEC Regulation G governing non-GAAP disclosures such as EBITDA causes it to turn a negative EBITDA to a positive EBITDA
It is incomprehensible that the SEC has so far failed to take any action against Overstock.com for violations of Regulation G, despite being continually informed by this blogger, its recently terminated investigation of the company, and also taking actions against other similarly non-compliant companies to force them to correct such violations.

The sheer size of Overstock.com’s overstatement of EBITDA is clearly a material accounting error as defined by SEC Staff Accounting Bulletin No. 99. Overstock.com’s overstatement of EBITDA in violation of SEC Regulation G flips a properly calculated negative EBITDA of $428,000 into an improperly reported positive EBITDA of $1.117 million. According the SAB No. 99, one of the main considerations in determining if an accounting error is material is, “whether the misstatement changes a loss into income or vice versa.” Here with Overstock.com, we have a clearly material violation of SEC Regulation G in the company's Form 8-K filed with the Securities and Exchange Commission. See the charts below (Click on image to enlarge): 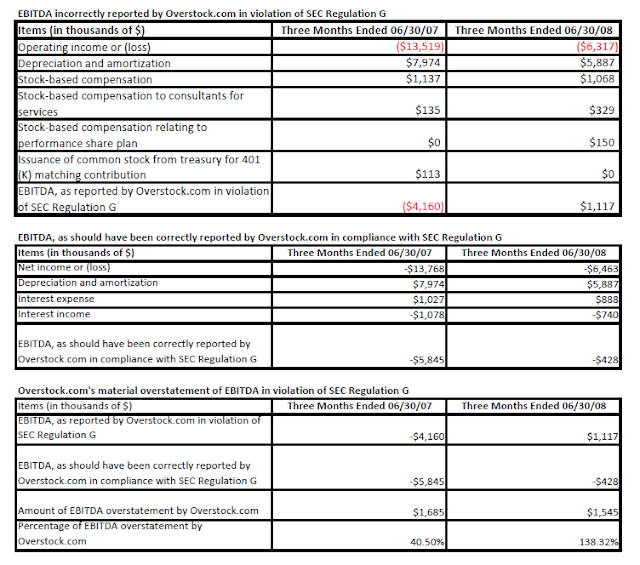 SEC Regulation G defines EBITDA specifically as "earnings before interest, taxes, depreciation, and amortization" but Overstock.com makes up its own EBITDA and violates SEC rules

David Chidester: Just – there is different ways people calculate EBITDA I think. We just want to make sure it’s clear that our calculation of EBITDA does [ph] include stock based compensation.

Patrick Byrne: Is that the convention?

David Chidester: (inaudible) It’s completely the convention in our industry and I think because it’s a new – it only came about a couple of years ago, everybody pretty much excludes it when they talk about EBITDA and talk about cash earnings.


What David Chidester said is that he thinks Overstock.com can compute EBITDA by eliminating stock-based compensation expenses from its computation and as a result of such a false claim by him, the company reported a materially overstated EBITDA in violation of SEC Regulation G. He further claims that removing stock-based compensation from EBITDA is "completely the convention in our industry." David Chidester's claims about Overstock.com's EBITDA disclosures are flat out false and as the CFO of a public company, he cannot claim ignorance to SEC Regulation G. That "everyone else is doing it" excuse was previously used by both David Chidester and Patrick Byrne as justification for the company's intentional revenue accounting errors uncovered by the SEC. However, SEC Staff Accounting Bulletin No. 99 specifically states that "Authoritative literature takes precedence over industry practice...."

According to the SEC Division of Corporation Finance Regulation G guidance provided by their "Frequently Asked Questions Regarding the Use of Non-GAAP Financial Measures" EBITDA refers specifically to “earning before interest, taxes, depreciation and amortization." See below:

Therefore, the intended meaning of “earnings” for EBITDA under Regulation G is “net income as presented in the statement of operations under GAAP.” EBITDA can only be computed as earnings (meaning net income or loss) before interest, taxes, depreciation, and amortization and the SEC requires that “measures that are calculated differently than those described as…EBITDA in the adopting release [Regulation G] should not be characterized as EBITDA.” Net income, not operating income as used by Overstock.com, is the starting point towards computing EBITDA and stock-based compensation expenses cannot be excluded from EBITDA according to SEC Regulation G.

David Chidester’s above comments about Overstock.com's EBITDA disclosures are flat out false! On May 13, David K. Chidester, Senior Vice President – Finance sold 2,766 shares at an average price of about $27.83 per share of and pocketed gross proceeds totaling about $77,000. After Overstock.com’s Q1 2008 earnings call, the company’s stock price plunged 41.12% or $11.31 to close at just $16.31 per share. As David Chidester cashes out, Overstock.com shareholders are bearing the losses.

The SEC has taken action against other non-compliant companies violating Regulation G but has utterly failed to take action against Overstock.com for similar violations

In a previous blog post, I detailed how CGG Veritas, like Overstock.com, improperly removed stock-based compensation expense from its reported EBITDA in violation of SEC Regulation G. The SEC Division of Corporation Finance informed CGG Veritas that:

The acronym EBITDA refers specifically to earning before interest, tax, depreciation and amortization. However, your measure also adjusts earnings for stock option expense. We will not object to your using such a measure as a liquidity measure but request that you rename it to avoid investor confusion. [Emphasis added.]


As a result of the SEC’s review, CGG Veritas changed its non-compliant EBITDA measure to EBITDAS or earnings before interest, taxes, depreciation, amortization, and stock-based compensation. CGG Veritas responded to the SEC that, "we will in future filings refer to the non-GAAP measure in question as 'EBITDAS' which we will define as 'earnings before interest, tax, depreciation, amortization and share-based compensation cost' ….”

In that same blog post, I detailed how CKX Inc, like Overstock.com, improperly reconciled its non-compliant EBITDA to operating income or loss rather than net income. The SEC notified CKX Inc.:

The Registrant has revised its presentation in the Summary Historical and Pro Forma Financial Data to include operating income before depreciation and amortization ("OIBDA"). All references to EBITDA have been removed. The Registrant has revised its disclosures to reconcile OIBDA to operating income which is the most directly comparable financial measure calculated and presented in accordance with GAAP. [Emphasis added.]


Therefore, CKX renamed its non-compliant EBITDA disclosure as OIBDA or operating income or loss before depreciation and amortization and the company was able to remove losses from discontinued operations from its non-GAAP financial measure.

What is the appropriate term for Overstock.com’s non-compliant EBITDA financial measure?

What’s going on at the SEC?

I am beginning to believe that our present SEC is not of the same caliber that I feared as the criminal CFO of Crazy Eddie in the 1980s. They are overwhelmed and under-resourced. Instead, they using their highly taxed resources to chase delusional conspiracy theories such as those blaming short sellers on problems related to the subprime crises effecting Fannie Mae and Freddie Mac. I suggest that you read Joe Nocera's blog post entitled, "First, Let's Kill All Short-Sellers." Perhaps that explains why companies like Overstock.com can thumb their noses at SEC rules while the SEC drops investigations of such companies.

As detailed above, Overstock.com's stock price on Friday 41.12% or $11.31 to close at just $16.31 per share after the company's misleading earnings release. Eric Savitz, in the Barron's Tech Trader Daily blog noted:

Stifel Nicolaus analyst Scott Devitt this morning cut his rating on Overstock.com (OSTK) to Sell from Hold. He notes that the company, which reported Q2 financial results this morning, trades for 21×2009 EBITA, “the highest multiple in the sector.”
Devitt says the company has had two consecutive quarters of mid-20% growth, but that it has had “fairly easy comps,” and that growth could drop into the low-to-mid teens by 2009. [Emphasis added.]


However, Gary Weiss noted in his blog that:

Sam [Antar] has specifically warned that Overstock was distorting the "growth" numbers reported to the public. He set forth his case in exhaustive detail. But analysts and the clowns at the SEC -- who just gave Overstock's accounting a clean bill of health -- paid no attention. [Emphasis added.]

I keep wondering why Pricewaterhouse Coopers doesn’t catch this material error in calculating a figure that is heavily touted in reports to investors. Rumor has it that they review the quarterly reports, but this makes me wonder. [Emphasis added.]


The tragedy of American capitalism is that most investors rely on incompetent or at the very least lazy and spineless Wall Street analysts for research and inadequately trained but similarly spineless auditors to make sure financial reports are free of material errors. This tragedy is further compounded by an overwhelmed and under-resourced SEC chasing delusional conspiracy theories touted by company managements who are unwilling to take responsibility for their misdeeds.